Heartworms are foot-long worms that live in the heart, lungs, and major blood vessels of pets. It sounds like something from a horror movie, but worse… it’s a reality. Whilst most dog owners rightly worry about heartworm, this parasite can also infect cats and ferrets, along with wild mammals such as coyotes, wolves, and foxes. While not so common in Europe, it does exist, so look out for the symptoms.

Ths post is the first in a new series on Pet Advice for followers of Louth SPCA on social media. These articles are also searchable on http://www.louthspca.ie

How Do Pets Pick up Heartworm?

The technical name for heartworm is Dirofilaria Immitis. This heartbreaker spreads from pet to pet via infected mosquitos. When the mosquito bites and feeds, it transfers heartworm larvae into the tissue of its dinner. 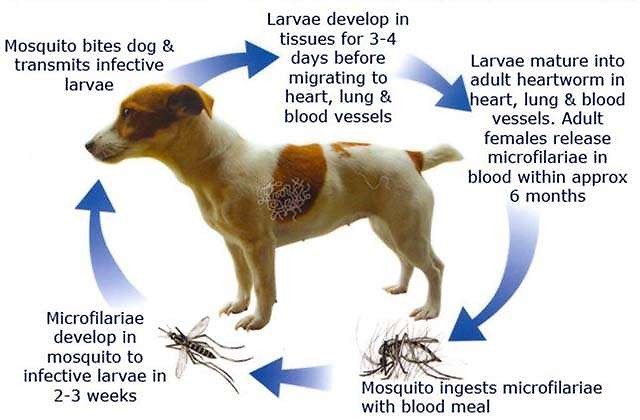 Once inside the body the larvae migrate through the tissue and after around 70 days use blood vessels as a super highway to make their way to the heart, its preferred home. Once there, the larvae slowly mature and grow into adult worms.

What are the Symptoms of Heartworm Infection

One of the many problems about heartworm is that infected dogs may not show symptoms until the adult worms fill the heart and clog blood vessels. Indeed, it can take as long as six months from the time of infection until the dog becomes unwell. In the mid-term stages, your only clue may be a dog that tires more easily than he should or has a soft cough.

As the worms grow, they take up more space and physically block blood flow. This results in signs such as:

Heartworm can give the owner a headache for so many different reasons. For a start, that six month gap between infection and clinical signs makes spotting there is a problem very tricky.

With heartworm currently found in every US state, any dog aged seven months or older, is at risk of infection. Your vet may become suspicious of heartworm if the dog is not on a preventative medication and shows signs of anemia, distended jugular veins, or crackles in the lungs. The vet may then suggest imaging such as a chest x-ray or an ultrasound of the heart.

Another important puzzle piece is running blood tests to detect the presence of heartworm. The most widely used test looks for antibodies, which are a sign the immune system is trying to defend itself against heartworm invaders. This is a super-helpful test because it can detect heartworm before it makes the dog ill.

However, if a problem is found heartworm treatment is not without risk. With this in mind, if the dog isn’t showing signs of illness, the vet may suggest a second backup test to be certain treatment is 100% necessary. This second test checks for the presence of the actual larvae, the equivalent of catching the heartworm red-handed in the body, and it means treatment is definitely worthwhile.

Heartworm is a frustrating and complicated condition. Indeed, there are a number of facets to treatment which make it quite tricky. These include:

The vet will put together a battle strategy which balances all the dog’s needs. Typically this means:

Like any drug, Immiticide can have side effects, which include soreness at the injection site, nausea, and appetite loss. But the bigger worry is what happens to the dead worms. These dislodge and in a worst case scenario, can block a major blood vessel and kill the patient. And dead worms can also cause a foreign body reaction where the immune system triggers a severe allergic reaction.

All in all, any dog on treatment must rest and take things easy. Now is not the time to play fetch or chase Frisbees as raised blood pressure poses an additional risk. Those dogs that respond well in the long term are those cases picked up on routine screening, rather than when they are already sick. For those dogs diagnosed when they are unwell, the outlook can be gloomy, especially if permanent heart damage has already taken place.

Heartworm Prevention is Better than Cure

All in all, prevention is better than cure. Happily, there are several excellent preventative medications that are super easy to give. Remember to dose your dog regularly once a month to keep their protection current.

And if you forget and there’s a gap of longer than two months, then it’s essential to get a screening blood test.  This is because larvae may have already entered the resistant phase of their life cycle won’t be killed by the preventative and will go on to mature into adult worms.

However, just to complicate things further, the blood tests can throw up false negatives. This is especially likely in a new infection. Thus, if you’ve had a gap in heartworm protection, your vet may suggest restarting preventatives and getting a blood test after six months, by which time the risk of false negatives is low.

If you worry about giving your dog medication and the effect it has on their body, then don’t. The doses of active ingredient are low and the products have a high safety margin. Thus the benefits far outweigh the risks, and taking preventatives is likely to save your from heartache. Remember, heartworm infection is common and a serious threat to your dog’s health, so take steps to prevent it.

The Louth Society for the Prevention of Cruelty to Animals (Louth SPCA) is a non-profit animal rescue and welfare organisation. The Louth SPCA is situated at Walterstown (on the L1182), Dromiskin, Co. Louth Eircode A91 CP82

Our aim is to improve the welfare of all animals – both domestic and wild – through a range of activities, including inspection of reported cases of cruelty, organising the fostering and rehoming of animals, and provision of education on animal welfare. If you wish to report a case of cruelty please click here, all information will be treated as confidential.

Louth SPCA is staffed by volunteers only, and relies heavily on donations for funding. If you wish to make a contribution, please click on our Donate button.